The St. John’s County Sea Turtle Washback group did a routine survey of the beach this morning and I thought I’d quickly share a few pics that I took during my walk.

The tide was low and the waves were glassy so it was a little surprising to see the seaweed line all the way up into the dunes. It doesn’t look like there was a beach at all during the last high tide.

Wood and rusty nails laying on the beach

And not only did the water throw things on to the beach from the ocean, it pulled things, like cacti and pieces of wood (full of rusty nails), out of the dunes. So, please be careful walking through seaweed.

I’m still finding old sea-turtle eggs on the beach too.

Sea-turtle egg found in the seaweed

But of all the things I found on the beach this morning, I’d have to say my favorite was the butterflies.

Butterfly in the seaweed. 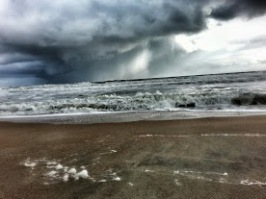 Yea, this storm is coming for me…and it gets me.

In August I decided to volunteer with a sea turtle rescue group. I figured, as long as I had time to walk the beach in the morning, I might as well volunteer. At first I was walking on St. Augustine beach but thought it would make more sense to start walking some place that was a little closer in order to save on gas.  I chose to walk on Vilano, my old stomping ground, which is also 3 miles closer.

Finding a group was a little more complicated than I thought it would be. Different people or organizations have permits on different sections of the beaches, to do different things. Some groups are permitted to stake the nests and handle the hatchlings and some are permitted to handle the washbacks. Washbacks are baby and juvenile turtles that get washed back on to shore after probably already having made it out to the Sargasso Sea (seaweed nursery for turtles). I originally wanted to sign up with the Sea Turtle Patrol because they go out early in the morning but I was told that it was too late in the season. Florida’s sea turtle season is from May 1st to October 31st so they were just wrapping up. I did a  quick online search and found the St. Johns County Sea Turtle Washback Program. They are responsible for surveying the seaweed that washes up after storms or strong winds, and looking for the washbacks.

The Washback group does a routine survey of the beaches every two weeks, as a way to stay motivated and get to know each other. We each walk a mile or two, searching for washbacks and picking up trash. I have to admit, doing this causes some mixed emotions. I enjoy the beauty of my surroundings and I am always in awe of nature, the universe, and the creator. But on the other hand, I lose a little faith in humanity with every balloon, water bottle, and beer can I pick up. I just can’t comprehend (and don’t want to) how so many people can be so disrespectful and unappreciative. We have been given such beauty and abundance, yet we are quickly destroying every last bit of it. Because of these walks, I now harbor a deep hate for balloons- beautiful, bouncy, fun balloons. On one walk, after a nor’easter I found nearly 20 balloons in two miles! I find them every day. I find the seaweed growing and wrapping around the pretty ribbons tied to the ends. I know people love to let them go and watch them magically float away but what they don’t see is where they come to rest in our oceans. Sea turtles mistake them for jellyfish, eat them, and die. I fantasize about walking up to an outdoor birthday party and stabbing all of the balloons! Yeah, I know, crazy talk.

Trash I collected in about 2 miles.

As I walked south down the beach this morning, on my routine survey, I could see a dark storm cloud to the north that appeared to be getting closer. And as I continued to walk, I started noticing all the little sandpipers were hunkered down in foot prints and holes in the sand. None of them were anxiously scurrying around at the water’s edge looking for food, as they usually are. I walked my section of beach, picking up whiskey bottles covered in goose barnacles, plastic bottle caps, and left shoes. When I was finished my reusable bag was overflowing and I’m guessing it weighed at least 20 pounds. I emptied it into the trashcan and turned around to head back to my car. I was now facing this immense black cloud that had been stalking me! I had to walk straight into it. As I was getting poured on, I made up a little wives tail of my own. If the sandpipers aren’t piping, you’re about to get soaked! (Feel free to make that rhyme and share it with me.) 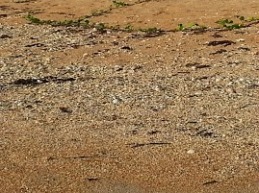 Sandpipers hunkering down. Sorry for the poor image but I didn’t want to disturb them.

My latest obsession has been to find and watch sea-turtle hatchlings emerge from their nest. It started when I was cat sitting for a friend that lives on the beach. One evening, on one of my routine visits to the beach, I saw a woman raking the sand in front of a marked turtle nest and I asked if they were expected to hatch soon. I was told that some of the turtles had emerged from a nest the night before and that more were expected in the days to follow. The woman was raking the sand flat so the tiny turtles would have a slightly easier run for the ocean. These little creatures have to scuttle past hungry ghost crabs and flying poop machines with wings (yes, seagulls) just to make it to the waters edge and they don’t need the added hazard of castle motes to deal with. She told me that the nests marked with green tape were ones that were expected to emerge soon and that they usually emerged before dawn. That did it! That started my obsession. I figured, if I just came out early in the morning, I would be rewarded with the honor of watching these teeny tiny miracles emerge from the sand and begin their epic journey to the emerald forest of seaweed, where they spend most of their juvenile lives.

Many, many weeks and many, many sunrises later, I can tell you that it’s not quite that easy. I can also tell you that they don’t always emerge during the predawn hours. As a matter of fact, they’re pretty unpredictable. They emerge late in the evening, before big storms, low tide, high tide, and, I guess, whenever it is they finally manage to dig themselves out from under all that sand. I have yet to see a live sea turtle emerge from its clutch. I have found one dead hatchling laying in the center of the marked nest, and was told it may have died in the clutch and been brought up out of the sand by the others as they emerged. It was a little depressing thinking that after all of my effort, all of my early mornings (with no coffee), and early nights to bed, the first one I found was dead. But I don’t regret it. Even if I don’t see a single live one, starting my days on the beach has been blissful. I perk up the second I step onto the sand and smell the salty air, and watching each and every sunrise is like witnessing a miracle. There is not a single morning that I leave the beach disappointed with having been there. I always see a magnificent ocean or a miraculous sunrise, or I manage to snap a good picture or see something breathtaking. Such as, one morning while trying to focus my camera lens on a small shark that was feeding in the surf, I caught something out of the corner of my eye. At first, because of my angle, I thought it was a whale tail lifting out of the ocean (with water dripping down and everything, like you see in whale tale photos) but then I realized it was a manta ray leaping out of the water! I knew there was no way I could lift my camera and refocus the lens on something so far away. So I just stood there, amazed and jaw opened and then I did a little happy dance. But then it jumped again! This thing was huge! I quickly put the camera to my eye and snapped a few shots. Unfortunately, all I managed to get a picture of was the splash it made as it reentered the water. I was kicking myself in the rear for being such a horrible photographer but the thrill of seeing that moment by far out weighed my disappointment of not capturing it.

This is the best shot I got of the manta ray jumping out of the ocean.

Links to my photos

My view while trying to take a relaxing bath. #TheYokaiKid
#colonialoakmusicpark #singoutloudmusicfestival #wildshiners #wild_shiners
I'm really kicking myself for not recording more lastnight but apparently I have a very short attention span when I'm full of rum tiki. #colonialoakmusicpark #wildshiners #singoutloudmusicfestival
#HummingbirdButt
Meet our new foster pup, Tyler! 😍 He's the sweetest! Please share these photos if you know someone that might be interested in giving this little guy lots of love. You can contact Ayla's Acres of you'd like to fill out an application to adopt him. He's a ChiWeenie! #Chiweenie #AylasAcres #staugustine
Hold still so I can measure you.😜 #staugustine #seaturtle #washback #sjcbeaches 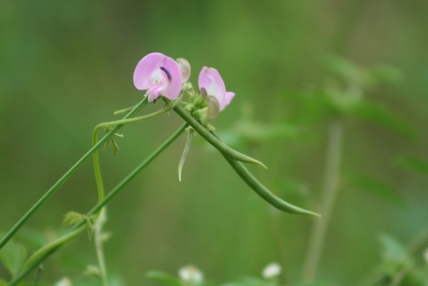 Is this a wild sweet pea? 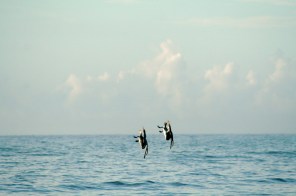 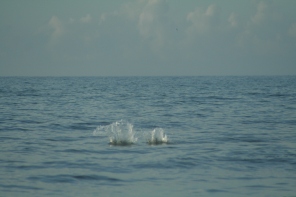 Gardening, Vegetarian Food and Life in the Mountains of Western North Carolina

to uncover that which is secret, hidden, or obscure... to reveal truth by exposing lies!